This is a follow up to my previous post on the Bhuping Palace in northern Thailand near Chiang Mai.

We followed signs along a path through ferns and trees and emerged by a huge water feature with fountains. The building on the hill is one of two guest houses with a definite Alpine look to it. There was music playing around the water; I read somewhere  that the pieces being played had been composed by the King of Thailand. However, I cannot find any confirmation of that on line. Just as we arrived, clouds moved in at our level creating a very atmospheric photo opportunity.

Below is my favourite photo, and I prefer it in black and white.  (Do you?) 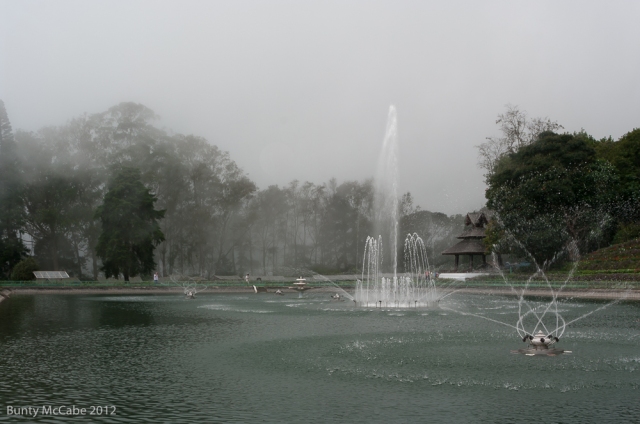 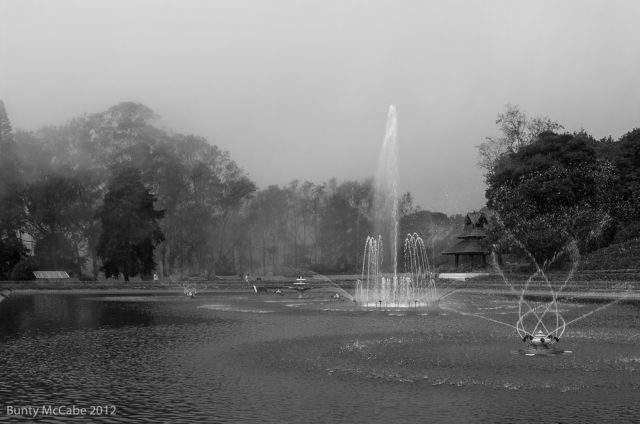 As we walked down from the King’s water feature, we came across this carving, complete with elephants emerging from the jungle. 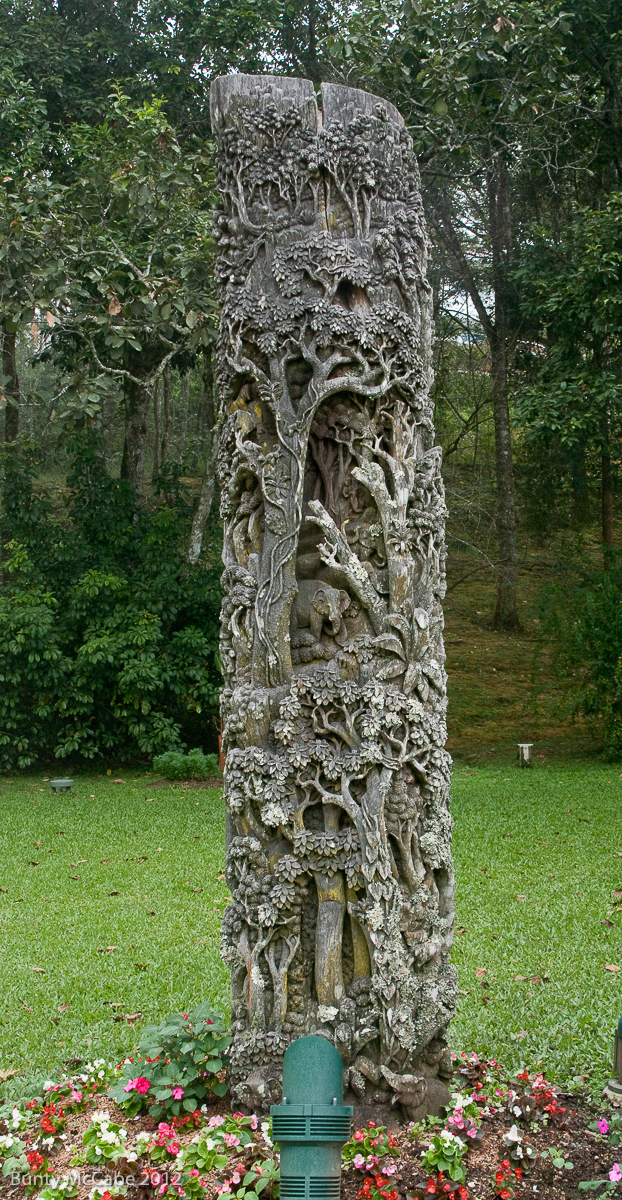 Here’s a link to another blog with more detail about the Bhuping Palace.

And a link from Tourism Thailand. 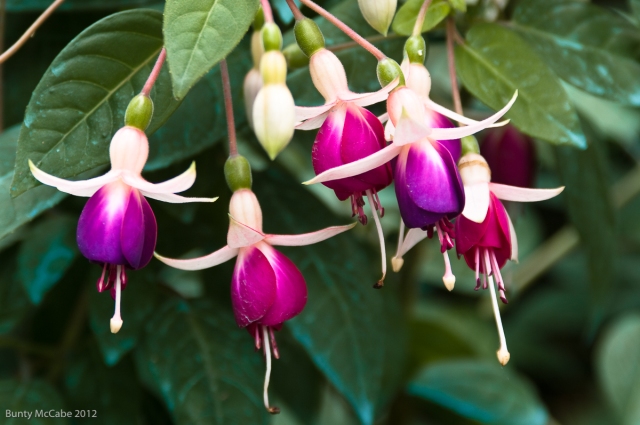 The Bhubing palace lies in Chiang Mai Province, about a one-hour journey east of Chiang Mai over twisty roads.

None of the buildings was open to visitors. Near the parking lot were a snack bar, toilets and a souvenir stall which was probably regulated by the palace.

Don’t let the lack of open buildings put you off a visit. First, for someone like me, from a temperate climate, who doesn’t take heat well, it was blessedly cool. Second, there were glorious gardens including a rose garden, and a path through a lush shady area of ferns and bamboo.

In the rose garden.

This post includes a sampling of the flowers. The Ipomoea was growing over the slate roof of a shelter.

From the Ipomoea family.

Orchids are such an exotic luxury in Canada. Seeing orchids blooming freely in this garden – but also in the wild – was a never-ending surprise.

The next post will feature the main water feature.
Posts about other Thai Palaces can be found here and here. 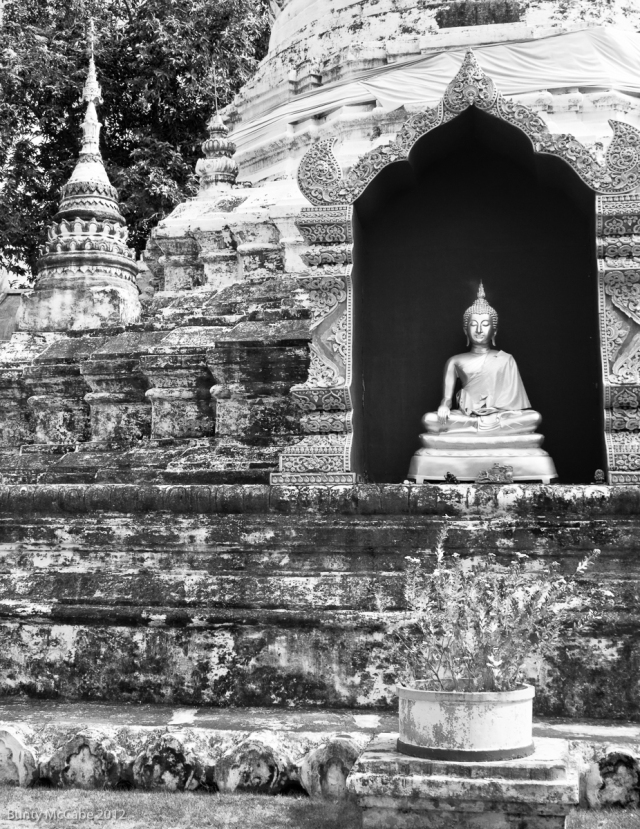 This is the last of five consecutive posts (well, six, if you count the one on Scale) of Black and White photos in response to a challenge by Ben Rowe of Aperture64.

With this, I am challenging these five bloggers to each post five days of black and white photos.

Felicia Noordman – she who also shoots with a Pentax K20D.

Nooortje Russell of Russels Lof who often makes me laugh even though I can’t read Dutch.

Janet Rimmington at Rose Bay Letters who lives in a neighbouring province in Canada.

Jim Holroyd of Tbilisi who sometimes posts in Black and White.

Avard Woolaver who lives closer to me than any other photographer blogger whom I follow and who often posts photos that look to be black and white, but aren’t.

Remember, no pressure, you do not need to take up the challenge; in fact you may already have been challenged by someone else. I will understand if you do not, but I would love to see what you might come up with.

…from a village above Chiang Mail…

…from the grounds of our accommodations, Railay Beach, Thailand….

Photos from Thailand will be my next series of posts. 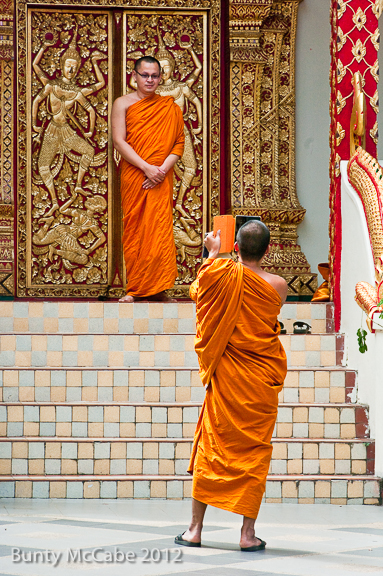 Extra, Extra!  This photo would be a mere snapshot without the colour of the iPad cover.   I entered it in the category ORANGE in our local photo show where people who looked closely ‘got it’ but where it wasn’t special enough to win a prize.