We took a three-week trip through parts of Alberta and British Columbia and came home at the end of May to find that we had hardly missed spring on PEI at all. There were  some daffodils left, along with other spring blooms, and a lawn full of self-seeded forget-me-nots, johnny-jump-ups (Viola tricolor), dandelions, Ajuga, creeping charlie, another creeping blue flower that I’ve never managed to identify, along with a bit of grass. I just mowed around the pretty bits for now.  The winter was so mild that the poorly placed Forsythia bloomed this year too.

Tulips, Euonymous Emerald something or other, forget-me-nots, Dandelions and, back left, a Rhododendron that may bloom some year – but not this one!

Tulips, forget-me-nots and some sort of spreading violet.

iPhriday was started by Gray Days and Coffee and you can see a list of other iPhriday posts on her site here.

All my photos taken with an iPhone 6 and edited with the Photos app on my iMac. 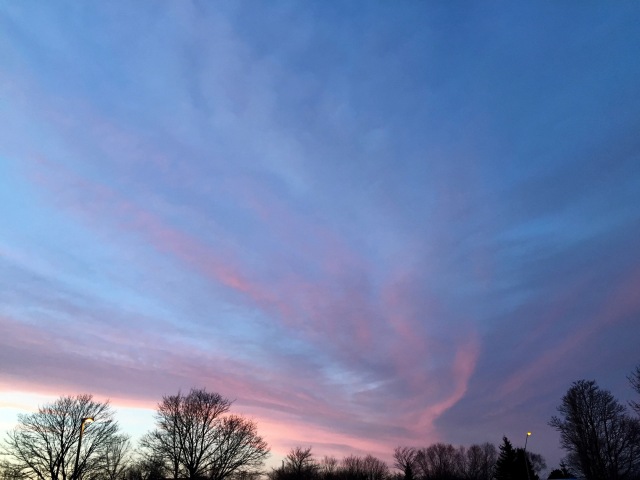 Sunset over East Royalty – iPhone 6 Back

The PEI Photography Club meets in the neighbourhood of East Royalty on the 4th Tuesday of every month. I had just left the meeting around 8:30 pm and saw this colour in the sky. The best camera is the one you have with you, and I only had my iPhone.

I switched to the Huemore app to get more of a panorama (below) but the colours were more diluted.

Back to the camera back for a shot over the church roof.

Sunset over Church – iPhone 6 Back

Gray Days and Coffee hosts iPhriday – a bunch of us who post our iPhotos or other phone photos on Phridays.

Because we are an island, surrounded by cold water from the Gulf of St. Lawrence, spring is always late. Today it was finally warm enough to do some yard work.

After spending a couple of hours raking pine needles and cleaning up a flower bed I lay on the grass getting pictures of my heather (Erica carne) and crocuses.

The second flowers of the spring.

Someone once remarked about insects on flowers and how that added something special to the photo. I find it’s nearly impossible to take pictures of flowers without getting an insect or two in the shot. And that’s a good thing. 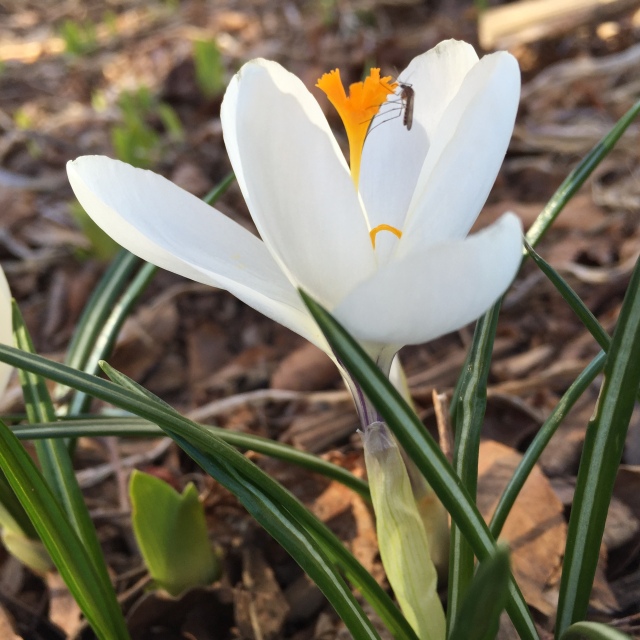 Both Thursday and Friday there were three seals sunning themselves on a spit of land downriver from the bridge. Your can barely see them – one is bigger and lighter than the other two.

High tides these four days have brought some seals up the river – following some sort of food, no doubt.

Photos taken with an iPhone 6.

iPhriday was begun by Gray Days and Coffee, who posts here.

I set up this post on iPhriday but couldn’t get the photos off my phone onto my desktop. First world problem….

Looking south – the shore is the part that’s reflecting (on the left,) and in front of the trees on the other side. The water is the grungy bit in the middle.  The dark parts are exposed river bed.

There was a storm surge today in Maritime Canada caused by an extreme low pressure system and the fact that we have just had a new moon – when tides are most extreme. There was extensive damage in the Bay of Fundy, but none that I’ve heard of in PEI. The high winds didn’t help.  The converse of the extra-high tide is an extra-low tide, which we noticed around supper time.

Looking North – the shore is the part that’s reflecting on the right and the mottled part in the middle. The river is flowing on the left. 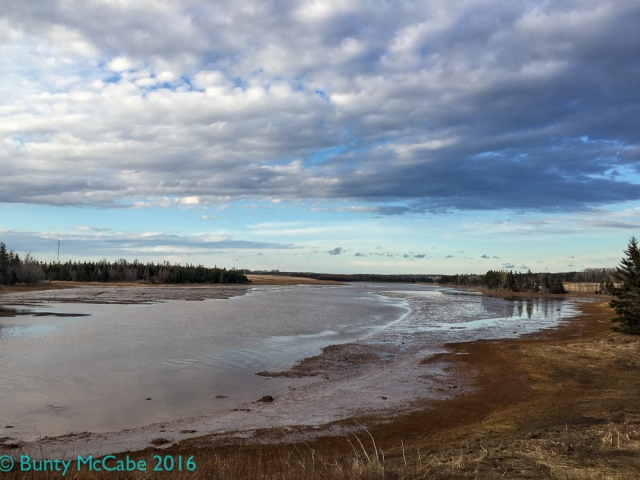 Looking North from closer to the bridge: the shore and river are more obvious in this photo.

This post is late for the WordPress Photo Challenge of April 1 on the subject of Landscape and you can see other entries here.

Looking west – Not so much a photo of the low tide, but you can see a gravel bar on the far side of the river and if you click on the photo to enlarge it you will notice a lone Canada Goose (we think it’s injured) in the river current.

This post is also for the iPhriday challenge begun by Gray Days and Coffee. You can look for other iPhriday participants by searching for the category or the tags.  The three wide photos were taken on an iPhone 6 using Hueless and edited in Lightroom on an iMac and the fourth was taken with the iPhone Camera.

I apologize, in advance, for what I know is going to be crazy formatting of this post; WordPress on this iPhone is terrible.

Looking south past a damaged spruce an on to a small twisted birch on the horizon line.

On Wednesday I walked cross country at the bottom of several fields so I could see the Canada Geese in the Seal River. In previous years the geese have been the Vernon River next to our house. Whether because of our bald eagles, or the grain fields next to the Seal River, or some other reason, they are waiting for spring weather elsewhere. The geese are too skittish to photograph on a wide angle lens, so I concentrated on the trees. Above, in the middle of the horizon line, and in the middle of what was – last year – a large potato field, there is a single scrawny white birch which you can barely see.  (The photo above and the one below were shot with the Huemore app for iPhone.)

Lonely Birch by the Seal River

At the edge of this field, before the land slopes down to the right to the Seal River, a hardy white birch was glowing in the late afternoon sun. 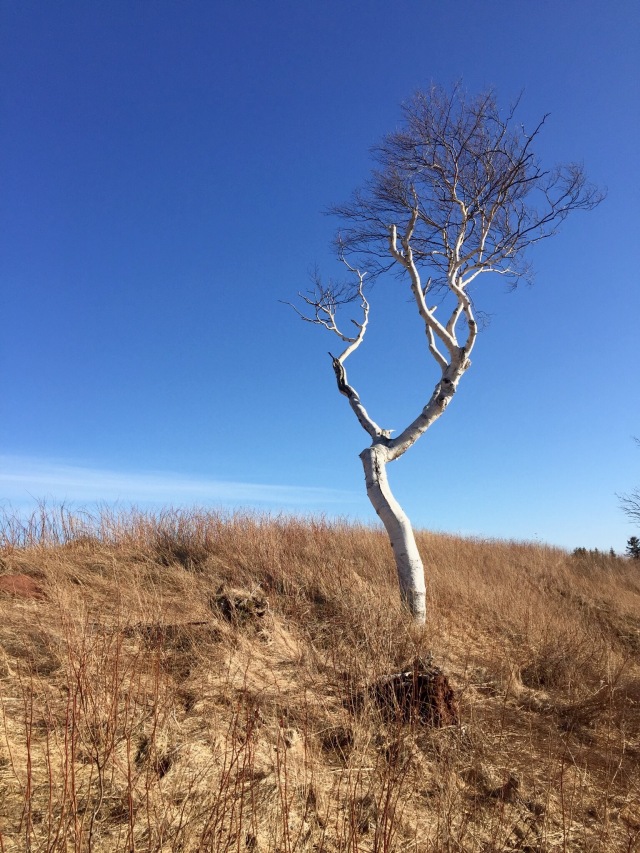 Backlit birch below shot with Hueless.

Today’s “featured image” was shot today – iPhriday – on the Ross Road in Vernon Bridge of yet another solitary birch.

iPhriday was started by Gray Days and Coffee who is taking a break….

It’s been a mild winter. I woke today to the sense that the world was brighter. It was. Snow fell overnight and heavily at times this morning.

We have a saying here: “Big snow: little snow; little snow: big snow.”  We were getting big snow(flakes) so, if the saying were true, it wasn’t going to amount to much. It didn’t.  Do you have that saying where you live?

On Monday, the second day of spring, we are forecast to get “little snow” and perhaps our most significant snowfall this ‘winter.’  Stay tuned.

Posted for iPhriday coordinated by the lovely blogger at Gray Days and Coffee.

Confession: I didn’t even leave the house to take these photos with my iPhone 6 using Huemore.

This first photo looks upriver past our shoreline at the right and includes open water, ice breaking in lines parallel to the shore, and water over ice in the background.

During a real winter the “pond” on the right freezes and pick-up hockey games have been held on it. But the last time I saw one of those was at least 10 years ago.  The pond drains away in spring and all but its bottom is planted with whatever is grown in that field in that summer.  Mr. IDWE in the yellow slicker.

Farm buildings obscured by the weather.

Shot Wednesday, February 17, for iPhriday on Feb 19 with an iPhone 6 and quickly uploaded before I headed to the airport to catch a flight to Cuba.  WordPress was totally uncooperative; the pictures weren’t visible in the media library or in the draft, so I had to abandon the post.  I’m back now and the photos did eventually finish uploading so here it is, one week late.

(Post-post edit: All day I’ve thought it was Friday. Took the iPhone to town with me, planned photos on the way home, posted this evening. I just realized it’s Thursday.  Ahhh the joys of being retired.)

As you drive along the shore road between the Town of Stratford and my home, 20 km away, the Pownal Escarpment is the rise of land to the north.

Western part of the Pownal Escarpment

Driving home along the Pownal Escarpment

In the next photo you can see a snowmobile trail crossing from one field to the next parallel to the top of the slope.

East end of the Pownal Escarpment

It’s not a very impressive escarpment compared with the Great Rift Valley or the Niagara Escarpment over which Niagara Falls tumbles.  An escarpment is simply a steep slope or long cliff that occurs from faulting, tilting or warping  and separates two relatively level areas of differing elevations.  All the slopes have been farmed for more than a century, some just up to the point where it became too steep, and where trees remain. Over the past 40 years several impressive and very expensive houses have been built at the top of the slope.

The pictures were taken with an iPhone 6 from my (stopped) car as I was driving back from iPhriday grocery shopping. I stopped about four times to take photos and not once did a car pass me on the whole drive!

For those of you who follow my blog, you will remember CauliPhlower from a couple of weeks ago. The price has gone down significantly.  They could just as easily have put 6.99 under the x-ed out price!

Posted for iPhriday a brainchild of Gray Days and Coffee,  who posts lovely photos all the time,whether with her iPhone or something more substantial!

Yesterday I posted Black and White pictures from the start of a heavy wet snowfall.

While I was out in the snow, I also shot some vibrant bits that caught my eye. 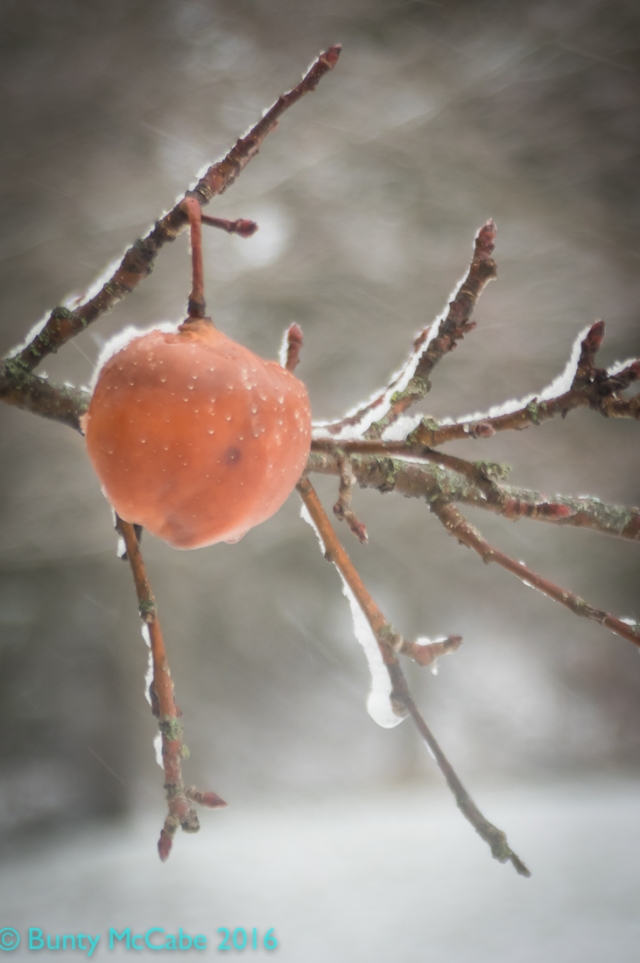 Persistent apples that turn from yellow to orange as the winter progresses.

Green! It must have been warmer under the pines because the snow there was melting. 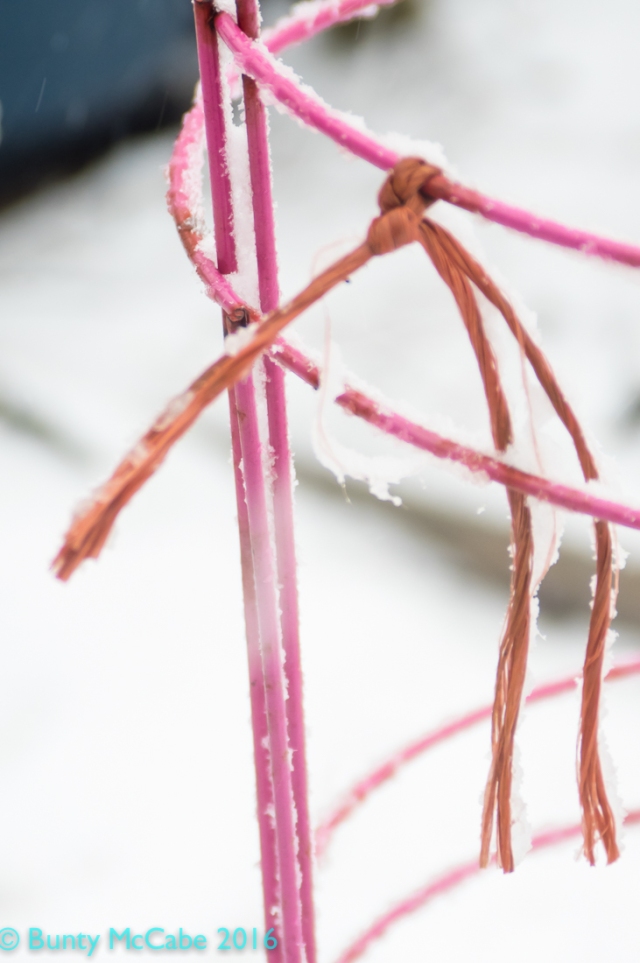 Red and Black. Rose hips on a shrub rose that reverted to its rootstock. I think it’s an invasive and I’m debating on digging it up.

And finally, our out buildings which are more vibrant when you aren’t looking at them through heavy snow!

To see how vibrant things are for other WordPress bloggers participating in this week’s photo challenge, have a look here.

All photos taken with a Pentax K3 and a Tamron 28-200 mm lens – several at 200 mm which is a 300 mm equivalent on the Pentax crop sensor. One of the reasons I shoot with the Pentax is that it is weatherproof.

On April 9 of last year – 2015 – this chipmunk emerged – probably from our garden shed – optimistic about spring. The stand for the weather vane on which the chipmunk is sitting is a meter (3 feet and some) off the ground and the snow is the cumulative result of two months of blizzards and storms.

This post is dedicated to all those in the eastern USA who were snowed under and snowed in this weekend.  I am thankful that the storm went offshore before it reached PEI.

Boundless optimism from other WordPress folks can be found here.

"I do wander everywhere"
Create a free website or blog at WordPress.com.