Day 19.  We flew from Guilin to Guangzhou (Canton! Who knew!) in the morning and were taken to visit the sculpture which seems to be the City’s symbol.  If you Google ‘five goats Guangzhou’ you will get many interpretations of the story behind the statue which was originally carved in 1959. The statue is not on the list of the top ten things to see in Guanzhou, but it is symbolic of the triumph of rice and good harvests over starvation.

Another view of the hill top park and some of my traveling companions:

In Beijing we had seen people doing exercise, often a form of line dancing or synchronized movements to music.  Here it is again on a hot day in south China.

Even the pre-schooler is getting in on the act. 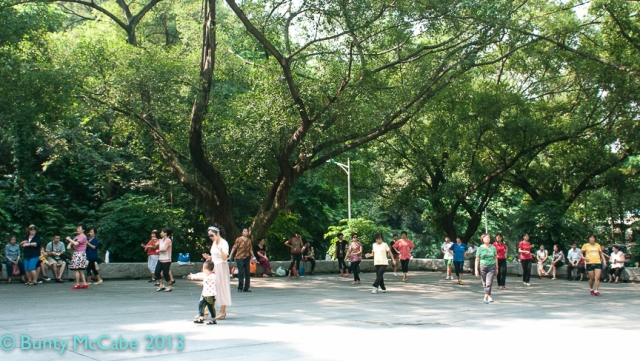 And finally, a stolen shot as we headed down the hill from the goats.

Another beautiful baby with a proud grandmother.

Next three Chinese posts will be from the Chen Family Ancestral Temple in Guangzhou.